Ball Screws – an answer to safe and efficient motion for Cobots

Collaboration robots (cobots) provide the strength, consistency and reliability of industrial robots with the judgement and flexibility of human operators. Cobots are increasingly used in large-scale production applications that involve continuous lifting operations but still require a human touch. While cobots have been in use for at least a decade and continue to grow, applications have been limited by the gearing systems that control motion. A French cobot maker, however, has developed a solution that uses ball screw and cable actuators instead of gears, setting a new benchmark for cobot efficiency and safety.

Building a more efficient workforce
ISYBOT cobots target applications that have not previously been or are difficult to automate. Cobots augment the human performance in many ways, such as eliminating fatigue, adding lifting strength, increasing accuracy or improving product quality. Furthermore, using the cobot restores manual attractiveness, making the worker a “cobot pilot”.

For example, the final production steps for manufacturing a passenger train might require an operator to move a rotary sander around the hull’s surface until it feels finished to the touch. With cobot assistance, the operator still guides the sanding tool around the hull surface, but it is the cobot arm that does the heavy lifting. (Figure 1) The cobot can also learn the path the operator follows, repeating it as many times as the operator deems necessary. Figure 1: Yvan M. Measson, CEO of ISYBOT, demonstrates how a Cobot can help sand the hull of an aircraft cabin.

Other ways in which cobots improve productivity and ergonomics might include assisting in picking and placing parts on an assembly line, assisting with simple batch operations, or any heavy lifting. Cobots can work with humans and also function autonomously, improving productivity. (Figure 2). Having the cobot do the most tedious part of the job reduces strain on the operator’s musculoskeletal system, while freeing them to focus on quality control. This elevates the role of the operator and helps reduce turnover. Figure 2: In addition to working with human’s side by side, Cobots can also work autonomously improving productivity and ergonomics.

Cobots are often used in industries where workers are constantly required to manually handle loads of up to 35kg or more. These include aeronautics, automotive, agriculture, naval, railway, defence or manufacturing facilities. Cobots are also valuable where workers might be exposed to hazardous conditions, such as nuclear plants or environmentally compromised areas where the cobot can help with the most hazardous parts of the job.

Building a better cobot
As he studied the market, M. Measson discovered that several other companies were entering but with solutions he felt were inefficient, cumbersome and potentially dangerous. The problem, he concluded, was in the gearing assemblies used to translate electrical energy into controllable motion.

“Gears have high friction ratios and add kinetic energy that, when released, can be dangerous. They also tend to be quite inefficient in the case of interactive use,” said M. Measson. “By replacing gears with more efficient ball screws, we drastically augment human strength and motion safely, consistently and efficiently.”

M. Measson explains that ball screws deliver high strength with minimal friction. His cobots translate 94 percent of the motor torque into motion. With just electric current, they can control force for sanding operations or handle loads that would otherwise require complex gear assemblies and sensors. In addition to being more space- and energy-efficient, the low-friction characteristic makes ball screws almost maintenance free and much easier to control.

He says that ball screws have much lower inertia than gears, which, when combined with the controllability mentioned above, has tremendous safety implications. Unlike robots, which are usually caged off, cobots work hand-in-hand with humans. They must be able to stop instantly, for example, on any incidental contact with humans. Because gears have kinetic energy pent up in their complex assemblies, stopping abruptly on simple contact is difficult.

Using the best ball screw
Having concluded that using ball screws would enable a highly efficient and competitive cobot, M. Measson and his team researched vendors and found that Thomson Industries would provide the best solution for his applications.

“Load capacity is a key differentiator for cobots. Ball screws enable handling of higher loads than gears, and the Thomson ball screws had the highest load capacity of those we evaluated. We also liked the fact that they get there with two leads,” M. Measson said. 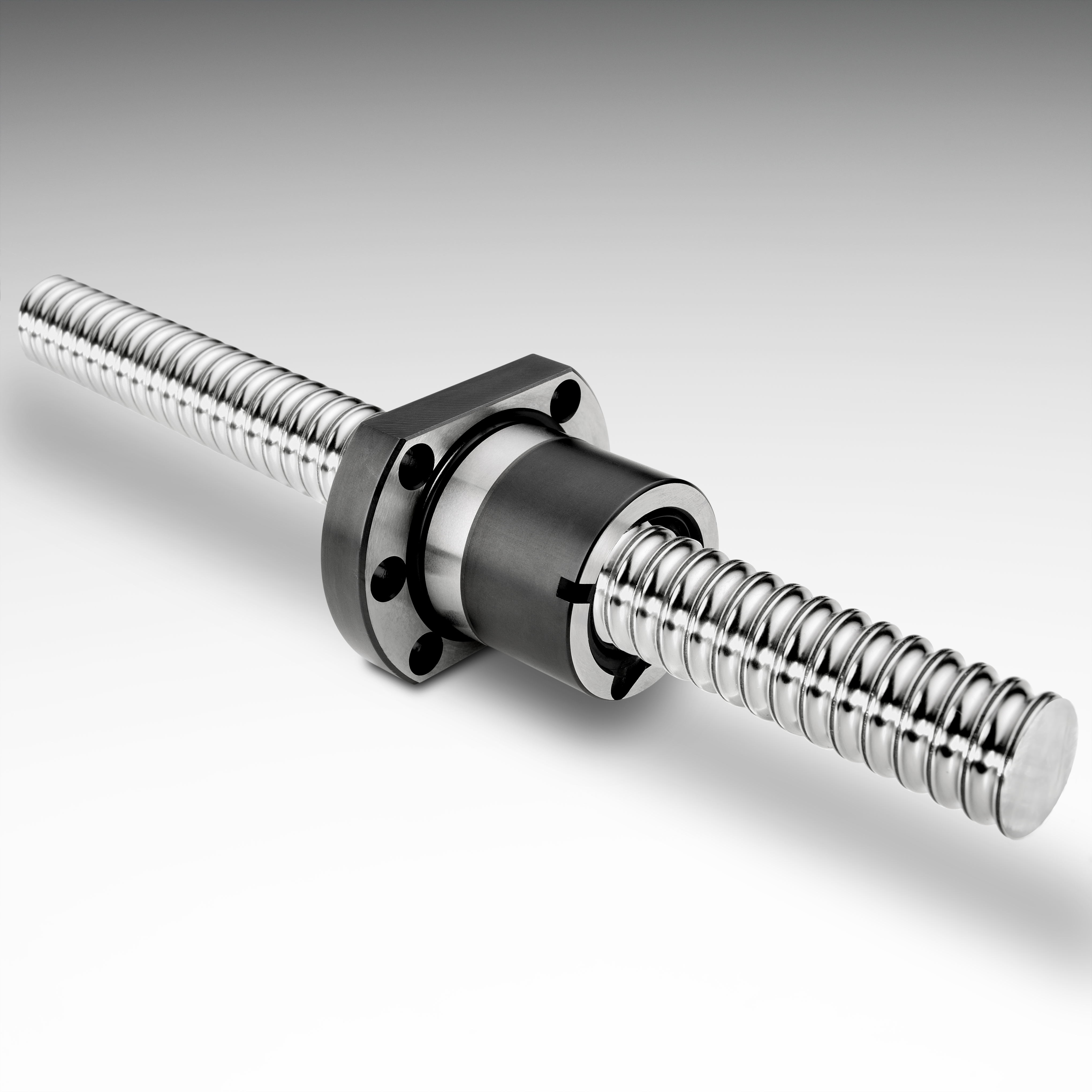 Thomson supplied three 12 x 10 rolled ball screws with a standard nut. (Figure 3). The higher capacity comes from a nut design based on two leads and four loaded turns, which enables a high load ratio in a very compact component. Moreover, Thomson was able to engineer the ball screws to leverage the low friction capabilities of balls screws in at least two ways.

First, where ball screw manufacturers might typically preload the nut and screw to minimise play, Thomson engineers were able to reduce play without preloading, thus reducing friction that preloading otherwise introduces. And to reduce friction further, where ball screw manufacturers might add wipers to protect barriers free of contamination, the Thomson design resisted contamination without wipers. With no preloading or wipers, the Thomson ball screws provided the smooth motion the cobot arms required.

Also, with inertial ratios of 7.595 kg-mm2, 7.353 kg-mm2; and 4.728 kg-mm2 for each of the specified ball screws respectively, the Thomson ball screws have among the lowest inertial ratios in the industry and provide a fraction of what a geared system would generate in handling a comparable load.

It’s all about the people
M. Measson is moving forward with many cobots on the production line, all of which are using the Thomson technology to deliver the low-inertia, low-friction and high-capacity motion that sets them apart in the gear-based cobot technology market. Most important to him is the fact that he is not only keeping the person in the process, but he is also making their work easier.

“When workers first saw the cobots, they were wondering how their jobs would evolve. But after using them for a short time, they became fans. That is very gratifying,” said M. Measson.