Optimising threshing motion
The Tribine cuts crop through the feeder house to a rotating cylinder or rotor, which, at 38 inches in diameter, is larger than most conventional combines. Performing much of the work in separating the grain from the material other than grain (MOG) are three curved “concave” segments that encircle the lower 270 degrees of the rotor’s circumference. “We had to be able to measure the exact distance between the concave and the rotor. We also needed a way of making sure that the concaves locked in place, so they don’t change during harvesting unless commanded by the operator. And because of the large size of our rotor cage, we needed actuators with enough force to enable fine adjustments to the concave positions to maximise threshing performance,” Secrest continued.

“CAN communication has allowed for quick and easy implementation,” said Secrest. “A nice thing about the HD actuators is that once you supply power to them, they exist on the communications side. You can set and forget.”

Implementation challenges
The CAN bus networkability and built-in positional awareness of each actuator helped Secrest overcome some unique mechanical and linkage issues in building the actuator assembly. To close the gap between the rotor and concaves, two actuators have to be extending while the third is retracting. But when the gap needs to open, two actuators would be retracting, while the other is extending. Synchronising this operation would be all but impossible without continuous feedback and movement commands, which are easily accomplished across the network bus.

“We don’t want any actuators to get more than 10-12 mm out of sync with each other,” said Secrest, who wrote the code of this precision synchronisation. “Each actuator provides feedback of its position or faults over the communication bus in real time, allowing a controller to track position and status and, therefore, synchronising position within 5-10 mm. They follow each other whether they are going in or out, and we never get into a position where they are grossly out of sync.”

Optimising grain bin operations
Once the grain is separated, a folding bin-fill auger transfers the cleaned grain to a 1,000-bushel grain bin. This size is made possible with extension doors on the top of the bin, which holds significantly more than conventional 350-bushel bins. The folding auger and extension doors are important for keeping the loading and transporting size to a smaller profile and must be synchronised to avoid physical damage to the bin extension doors.

To synchronise grain bin door operation, Tribine Harvester deployed four HD actuators on the sides of the bin and one in the augur, each of which is programmed to deliver feedback on the position of the grain door across the CAN network and be reset as needed. The feedback provides operators the information they might require to resynchronise the augur and grain door operations to avoid blockage or increase output. 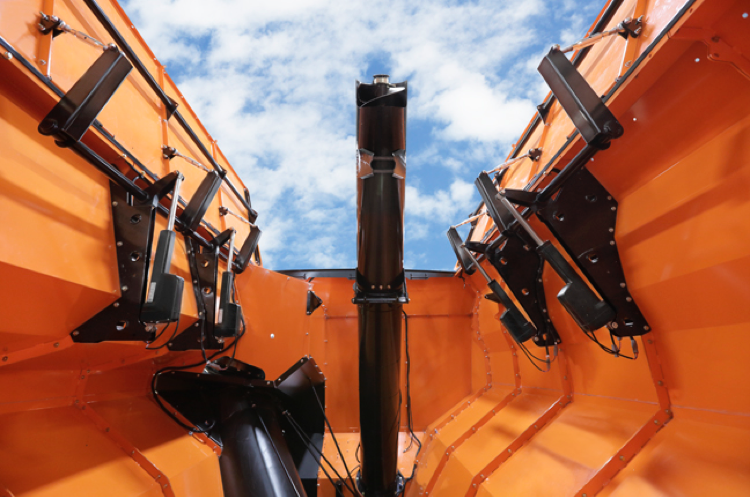 Likewise, actuators on the grain bin have contributed to the proven ability of the Tribine to meet its goal of unloading 1,000 bushels in only two minutes by synchronising the grain bin door and discharge chute. Such capacity also means that the Tribine can load directly to the semi-truck, eliminating the need for tractor-pulled grain carts.